Looking in from the outside, you might think the world of portable coolers isn’t rich with innovation.

If you’re thinking of buying the Yeti Tundra 45 and have no experience with coolers, then the price may take you back. How wonderful can a cooler be?

Coolers are used by people from so many different walks of life.

A good cooler can be used for the church picnic, a hunting trip to the forests, and a spring break in Miami. 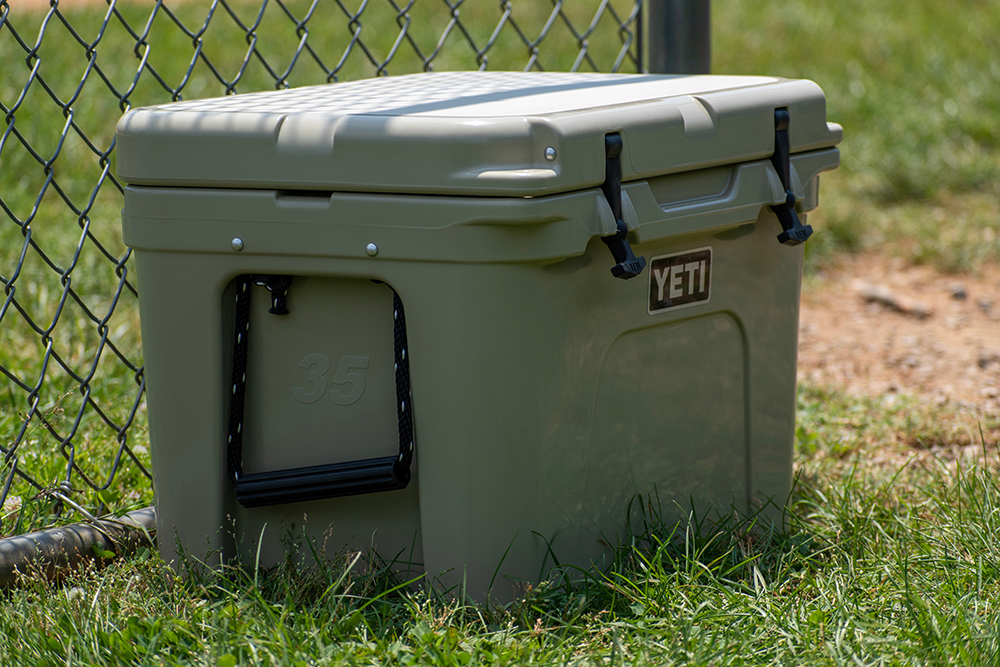 Yeti is one of the top names in cooler manufacturing, and their impressive designs are leaders in the market.

For anyone investing in a cooler, it’s hard to go wrong with the Yeti Tundra 45.

But if you’re still struggling with the price tag, this review will tell you everything to love about the Tundra 45, and anything that might leave you cold.

Who Is Yeti, And What Is The Yeti Tundra 45?

The Yeti company was founded in 2006 by two brothers who loved the outdoors. They were tired of using second rate coolers that barely lasted a trip, and wanted something that actually did the job, and did it well.

A cooler that stayed cool, stayed together, and stayed with you for years to come.

From here, Yeti was born. This was a cooler built for daily use, a cooler that would hold up to the outdoors.

Designed by people who understood the reality of travelling through the wilderness, and knew the kind of quality that was needed.

These aren’t just coolers to keep your beers chilled at a summer barbecue — although they do that, and do it well. These are coolers to take with you as you travel off the beaten track, safe in the knowledge that they won’t let you down.

Yeti quickly proved to be a formidable brand, and they’ve only expanded from there. The Tundra 45 is a midsized, hard shell cooler, designed for both day trips and extended travels.

The most important feature of any cooler is whether it can actually keep things cold. There’s no point having an unbreakable cooler if the ice can’t last until midday.

For the Yeti to earn its massive price tag, it needs to stay icy over the course of a long day.

This is a test that the Tundra 45 passes with flying colors. Almost no cooler can compare, and the only reason we say “almost” is that we haven’t tested every other cooler yet.

Perhaps, somewhere, there’s a brand that can match the Yeti for cooling prowess. It’s not one we’ve been lucky enough to experience.

The Tundra 45 has such incredible cooling ability that it can keep ice solid for several days.

If you’re heading away from civilization, the Tundra 45 means you won’t have to worry about eating your perishables by the end of day one.

For a fishing trip, you won’t need to rush back early just to keep your fish fresh. With an insulation ability like this, you’re able to live on your own terms.

So, how does Yeti do it? The Tundra 45 has some incredible design features to improve insulation. First, the FatWalls. These extra thick walls provide an impressive and unmatched three inches of temperature retention.

The FatWalls are the reason why a bag of ice can last for upwards of a week in cold weather when stored in the Tundra 45.

They’re also certified Bear-Resistant, which is nothing to complain about.

But it isn’t just about the FatWalls. Yeti also lines the walls and lid of the Tundra 45 with Polyurethane, which is pressure-injected into the space to create the Permafrost insulation.

Polyurethane is a tough material, and it expands to fill the empty gaps in the walls through which cold can be lost. With Polyurethane blocking the way, the chill stays locked in for longer.

Finally, there’s the cold lock gasket. These freezer-quality gasket circles are found across the lid, creating the outer rim. When locked into place, they keep the heat out (and the cold in).

With these three elements combined, the Tundra 45 is a cooler like no other. It’s obvious that the creators understand how important it is to keep things cold, and the simple system really does work.

The Yeti Tundra 45 is essentially a tank. This bear-resistant cooler can withstand almost anything you can throw at it — literally, try throwing things at it and see if it breaks.

Able to withstand the rough and tumble of a life in the wilderness, the Tundra 45 is a cooler with quality in every corner of the build.

To understand what makes the Tundra so special, you have to know about rotomolding. Rotomolded construction is a term that gets thrown around a lot in the cooler world, and many know to associate it with quality.

But few people actually understand what it means.

Rotomolding is short for rotational molding, which doesn’t really explain anything. A rotomolded cooler is made by pouring plastic into a hollow mold, which is then turned and rotated.

The end result is a stronger, more durable cooler. By rotating to fill the mold, there aren’t areas of inconsistency, where weaknesses can occur.

With no joins and thick corners, a rotomolded cooler has almost no areas of weakness.

The Yeti Tundra 45 is constructed using this rotomolding technique, making it armored all across the build.

Of course, any cooler has to have an opening lid, or it’s just a box. With other cooler brands, this lid can be one of the primary areas for weakness.

The latches snap, the seal is loosened, and the cold can sneak out. Not with the Tundra 45.

The Tundra 45 uses T-Rex latch technology, a patented design that snaps into a tight hold. Formed of heavy-duty rubber, these are latches that are easy to lift but difficult to break.

The large design can be gripped by even small hands, so everyone can access the cooler. But they can be slightly hard to fix back into place.

However, the solid latch is so good you can forgive the slightly clunky movement.

On the other side of the lid are the “neverfail” hinges — Yeti’s words, not ours. Consisting of two hinge pins and an interlocking design, Yeti promises that this is a hinge that will never break.

The movement is smooth, and you don’t have to strain to get the lid open. It also stays open, so you can rummage in the cooler without dodging falling lids.

Quality construction doesn’t just stop at getting the lid open. The Tundra 45 has some stand-out design features across the build.

The non-slip feet are a useful touch, and stop the cooler from sliding in the back of a truck, or when out on a boat.

There’s also a vortex drain system in the base of the cooler, allowing you to drain water without emptying everything out. It saves time, and keeps contents chilled.

The Yeti company was started with the aim of creating rugged coolers, and that ethos is clear in the Tundra 45.

If you’ve found previous coolers just can’t withstand the travel and carry of trips outdoors, then the Tundra 45 will be a wonderful surprise.

But, realistically, you expect it to hold 45. Admittedly, Yeti never specifies it as a 45 quart cooler, and they do make it clear that it can only carry 8.2 gallons. Still, that “45” does seem to imply something different.

Once you look past that, the Tundra 45 has a more than decent capacity.

According to Yeti, it can hold up to 28 cans of beer, which should be enough for most trips. This is a very versatile cooler, with a size that works for both long weekends away and short days out.

For a camping trip, you won’t find yourself desperate for space. Use it for a day at the beach, and you won’t get annoyed carrying a half empty cooler around. The capacity of the Tundra 45 is just right for the average person.

If you’re impressed by the Tundra 45 but looking for something bigger, then Yeti has you covered. They have a fantastic size range, which includes some huge coolers.

As we mentioned earlier, the Tundra 45 is built like a tank. And while that has some obvious benefits for durability and toughness, the downside to that is portability.

With the Tundra 45 filled to the brim, it feels like you might need a tank to carry it.

The empty weight of the Tundra 45 is 23 pounds. Most will find carting around the empty cooler a one-person job, although perhaps not a particularly comfortable one.

When you start adding ice and other items, the Tundra becomes distinctly harder to move. Weight combined with bulk means that anyone looking to move the full cooler might need to ask for a hand.

If you’re feeling up to carrying it, Yeti have included double haul rope handles made from durable polyester. These are fine, but have a bit of swing to them.

With a bulky cooler, that extra movement can become inconvenient (e.g. when it hits you on the back of the legs). Thankfully, there are also molded lipgrip handles, so you can grasp the cooler more firmly.

The non-slip feet have both their good and bad sides. The good thing is that the cooler won’t go swinging around in the back of the truck so much.

The bad thing is that it’s difficult to slide the Tundra 45 along the floor, so you have no choice but to carry it.

When the cooler is packed to the brim and you need to move it 2 feet to the left, having to call the cavalry for some extra man power is annoying.

Portability may not be the best, but it’s the natural trade off for the incredible cooling features. And while the Tundra 45 may not be the easiest to move around, both sets of handles are sturdy and easy to grip.

The Yeti Tundra 45 is not cheap, and it’s going to set you back several hundred dollars.

If you’re after a cheap cooler to see you through a holiday weekend and then live in the basement, the cost of the Tundra 45 might seem excessive.

But the price isn’t bad when you consider the features.

The Tundra 45 really does stay cold, and it stays cooler for longer than any of the lower priced competitors. The superb quality of the build is reflected by the price tag.

The Tundra 45 may be expensive, but in this case you really do get what you pay for.

The Yeti Tundra 45 is an investment cooler, a cooler with the durability and design to be useful for years to come.

If you want a cooler to see you through almost all occasions, then the Tundra 45 is certainly a good buy.

When you buy a Tundra 45, you get superior insulation, a sturdy build, and a design clearly influenced by lived experience.

It may set you back a significant chunk of cash, but you’ll appreciate why when you crack open an ice-cold beer on day three of your camping trip.